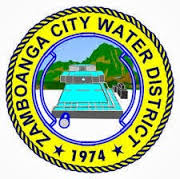 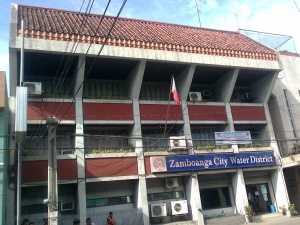 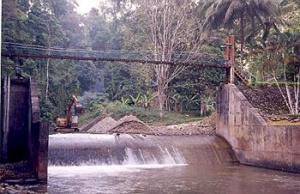 At the source of the Tumaga river which is only about 5 kilometers from the barangay of Pasonanca, the river can be dammed. It is naturally bordered by hills and mountains from 200 to 400 meters high.

By doing this the City of Zamboanga will never ever suffer from water shortages. There will be enough water supply even for the irrigation of farms. I have lived in Tumaga most of my life and this river never ran dry. The old folks much older than I am, attest to this same fact. The creation of this man-made lake may even be used for recreational purposes and to propagate the local species of fresh water fish for recreational fishing.

There is also a possible second benefit. Hydroelectric power can be generated from this dam.

If there is pro-active planning for this construction, turbines for generators can be planned into the construction of the dam. There will be enough electricity generated from these turbines to provide ample electricity for the entire City of Zamboanga and the Zamboanga peninsula.

If the city does not have the budget for this project, I am absolutely positive that private investors will be lined up to put up the dam. This will give Zamboanga City ample supply of water and electricity.

Imagine that! No more black outs and no more water rationing. Even the farmers will benefit in terms of irrigation.

This is the proposed area of the Reservoir. Mt. Columbato (Pulumbato) will be located to the right of the Dam. It is a natural border. The area of the reservoir (LAKE) will be approximately 4 square kilometers. That is a good sized lake that can conserve all the water during the rainy season. No more flooding incidents. No more lives lost. No more properties destroyed. No more water rationing. No more blackouts.

There will be an extra benefit to this project. It will be an inland water resort. Great for fresh water fishing and boating. Zamboanga City does not have a large inland body of water. We only have ponds. This will be about a 400 hectare lake. 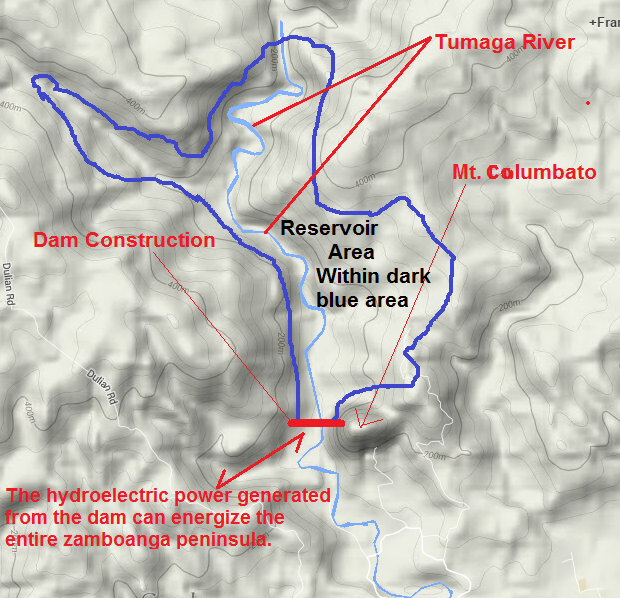 The reservoir (lake) will be about 400 hectares.

The Zamboanga City Water District is working on counter measures as it prepares to move into possible water rationing in the face of continued decline of water levels at its water source.

Engr.Teotimo Reyes, Jr., head of water production, disclosed that water elevation at the diversion weir (dam) stood at 74.10 meters which is lower than the normal level of 74.20, which considered as critical level.

Reyes disclosed ,if water levels continue to drop, the water firm will have to resort to water rationing this summer season.

“Right now, our water production management team is currently testing a novel system of regulating water flow to consumers through a pressure ment system that will seek to evenly distribute water pressure in the pipes and allow water to flow into the consumers’ households,” Engr.Efren Salvacion of the Department said.

This scheme will allow water to build up on off peak hours and help keep water in the pipelines at all times, Salvacion added.

The ZCWD’s pipeline network is divided into three major zones, namely: central which is the downtown area of the city, the east coast and the west coast.

Water will be piped alternately into these zones to provide most of the water consumers ample opportunity to store enough water for the day’s use.

“The past years’ experience in water system management during the summer season has provided valuable insights to our engineers in looking at ways and means to provide water during the hot dry summers,” Reyes revealed.

Accordingly, the city is vulnerable to water source dry up as it is being supplied by surface water via the Tumaga river and its tributaries.

Salvacion and Reyes also added that the new scheme they are currently testing on will hopefully improve water distribution this summer and provide steady water supply despite low water pressure brought about by decreasing water inflow into the system.

Earlier, ZCWD General Manager Leonardo Rey Vasquez called on everyone to start storing water in case water supply inflow does not improve in the weeks ahead. Vasquez also added that people should make judicious use of water during the hot summer months. 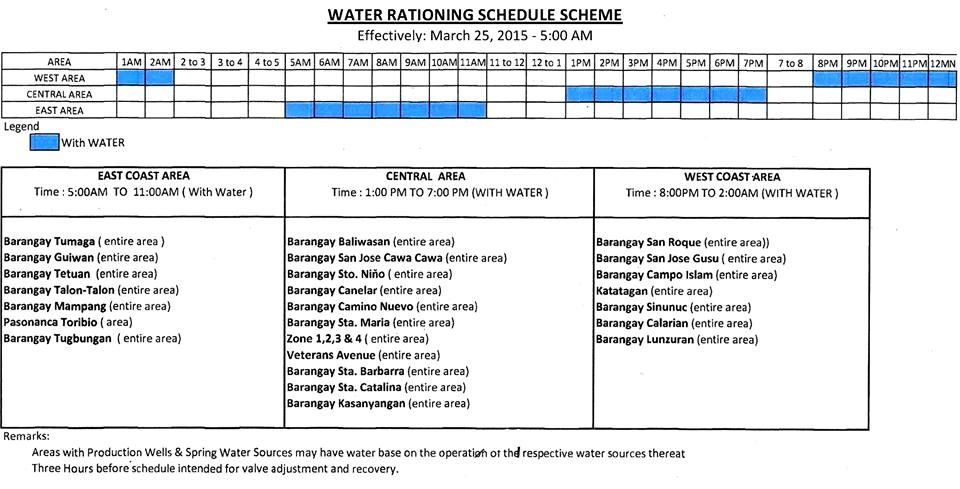 The watershed is located in upper Pasonanca park and it is the sole source of the Tumaga river which runs through the barangays of Pasonanca, Tumaga, Guiwan, Tetuan and Tugbuan.

Located in the barangay of Pasonanca. Water from the Tumaga River is diverted to this purification and filtration plant to provide water to the City. 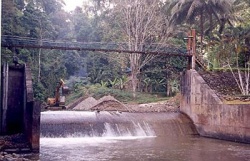 The diversion dam on the Tumaga River was constructed about 4.1 kilometer upstream to divert some water to the Water Treatment Plant. The dam is made of reinforced concrete construction. It has 18 meters long crest, 3.50 meters toe to crest height. It has an elevation of 74.20 meters above sea level. It’s main purpose is to divert water coming from the source (watershed) to the treatment plants thru the two transmission lines especially during summer season when streamflow is below normal.

The original water system in Zamboanga City was built by the United States colonial government in 1911 for the purpose of serving the needs of US forces in the city at the time. It consisted of an intake box, a grit removal basis, a three- kilometer reinforced concrete aqueduct, a reservoir and a distribution system. This was expanded in 1930.

The DENR has constructed several outposts within the watershed and permanent government employees are on duty there to keep an eye on would be poachers and illegal harvesting of lumber.