East to West Water Pipeline. Prevents flooding and drought, it saves lives, and it helps build the economy.

President Donald Trump said in his state of the union address last Tuesday, January 30, 2018: “Together, we can reclaim our building heritage. We will build gleaming new roads, bridges, highways, railways, and waterways across our land. And we will do it with American heart, American hands, and American grit.”

In 2015 former President Obama said: “While no single drought event can be traced solely to climate change, the fact of the matter is with a warming climate we’re going to see more frequent and more severe droughts in the West in the future. That’s one of the reasons my administration has been focused on helping communities prepare for the effects of climate change.”

In order for life to prosper, water is needed. Water is a source of life.

Waterways: Build the East to West water pipeline from the Mississippi river to the head waters of the Colorado river to minimize flooding in the eastern states and relieve the drought suffering states in the west. Farmers of western america will no longer suffer from lack of water and disasters due to flooding in mid-west flood zones will be drastically reduced. Building the water pipeline will provide jobs. Water pipelines will not cause much of an environmental impact. Maybe a few leaks here and there. Just water. Nothing hazardous. It will in fact help the wild life.

The Colorado River and its tributaries  provide irrigation to farmlands in the seven basin states of Colorado, Wyoming, Utah, New Mexico, California, Nevada and Arizona. Irrigation to almost 6 million acres of farmland, and not to mention the over 40 million people who require the water for their survival.

According to the California Agricultural Production Statistics over a third of America’s vegetables and two-thirds of the country’s fruits and nuts are grown in California. They are already depleting the Sacramento river and San Joaquin river. The salinity of the San Francisco Bay is increasing yearly. Already much of the waters of So. California for irrigation is taken from the Colorado river. The water distribution of the Colorado river water is controlled mostly by the Metropolitan Water District of Southern California.

As the Colorado river flows through Nevada, most of it’s water is contained in Lake Mead and Lake Powell.
Lake Mead located in (Mohave County, Arizona and Clark County, Nevada) is at its lowest as of 2015. The hoover dam depends on the water level of lake mead. The water level of lake mead has been gradually depleted. The reservoir stores water for parts of Arizona, Southern California, southern Nevada and northern Mexico — all of which have endured a 15-year drought.

Lake Powell is on the Colorado River and straddles the states of Utah and Arizona.

This pipeline guarantees that Lake Mead and Lake Powell will stay full at all times. With the availability of water, the fertile lands of California, Nevada, Arizona, New Mexico and Utah will produce enough food to feed America and still be capable to produce enough surplus for export to other countries. Not to mention the continued water supply to the Morelos Dam in Mexico. To accomplish this the water pipelines must be built.

The Cucapa (Cocopah) indians who farmed and fished here, no longer can sustain their way of life. The desert is taking over the area. The lush wetland is gone. The Cucapa (Cocopah) lived in the delta for over 1,000 years and lush flora and fauna sustained them. Now most of the tribes people have left and there are less than 200 left and within a few more years they will be gone, unless the water pipelines are built. Before the hoover dam, Glen Canyon Dam and the Morelos Dam in Mexico were built, boats from the sea of Cortez sailed up to the mouth of Colorado river.

With this sustainable water management, the fresh water from the Colorado river will abundantly meet the salty water of the Sea of Cortez or Gulf of California once more. The fishing industry for the community in that area will flourish again as it did. Nobody loses in this water pipeline project. The entire United States of America benefits. Even the country of Mexico will benefit, specifically the states of Baja California, Baja California Sur and the state of Sonora. Not to mention the revival of the ecology in the estuary. This is the way of Universal stewardship.

Every year flooding disasters happen in central and eastern United States. Lives are lost. We can’t put a doilllar value to peoples lives. Some of these flooding can be avoided if these pipelines are installed. The excess water can be diverted.

IMMEDIATE BENEFITS FROM THE WATER PIPELINE:

The pipeline will start in Davenport, Iowa – 580 feet above sea level.

Only excess water will be drained from the Mississippi river. So the the mouth of the pipes will be sealed and only opened when waters are predicted to reach flood levels. Pumping can start to prevent flooding. The Mississippi river floods every year. Sometimes the flooding is excessive and causes severe damages and casualties to livestock and human lives. This can all be prevented with the diversion water pipelines.

Centrifugal Pump stations, powered by vertical wind turbines will be installed every 4 miles to pump the water to the higher elevation. These vertical wind turbines (centrifugal pump stations) will also generate electricity. Plunger type pumps are not needed. Construction cost, legal fees, and all the other costs will more than likely more than double the cost. Even if the cost goes up to over $120 billion, this project is still be worth the investment.

Diminishing the disaster and flooding costs in the east coast which is already well worth the $20 billion to be spent on the pipeline. Not to mention the billions of dollars per year that the states of California, Utah, Arizona, Nevada and New Mexico will generate. Plus the farming profits of the country of Mexico that will be generated from this abundance of water.

The loss of the fresh water that flowed freely to the estuary have reduced the delta wetlands to only about 5% of what it used to be. The native forest of cottonwood and willow is gone. Imagine that! 95% of what was once prosperous is now DESTROYED. Yet the government does not do anything about it and you do not hear this from the media. 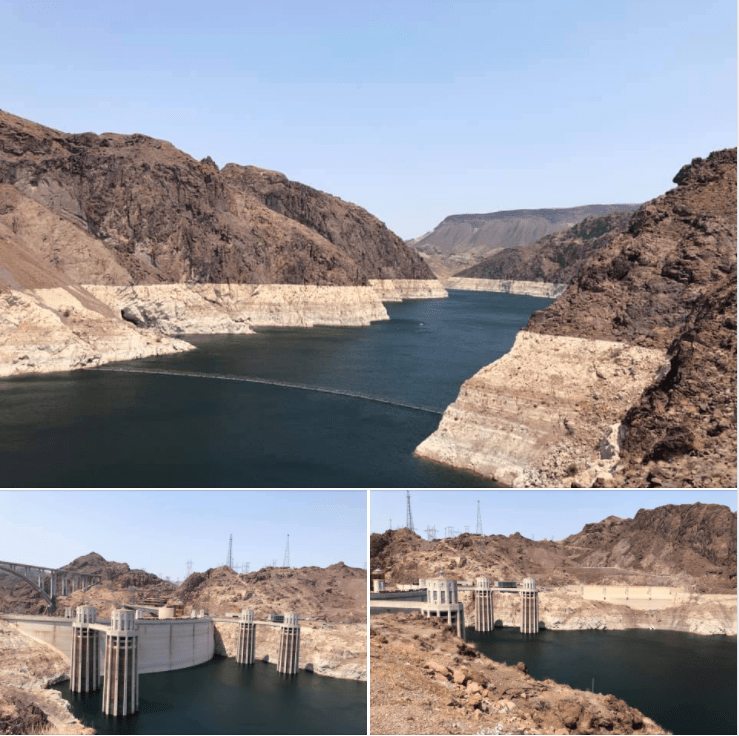 These pictures were taken last August 19, 2021 at Hoover Dam. Lake Mead has receded at least 40 feet over the last 15 years. Even if the weather gets back to normal and the flow of the colorado river is back to “normal”, Lake Powel and Lake Mead will never attain the level it had when Hoover Dam and Glen Canyon Dam were just built.

The increased water demand from all the states that depend on the colorado river prevents the lake from getting full again.

The only permanent solution is the water pipeline.

There are three dams that hold back the water of the colorado river before it empties out into the sea of cortez.

Every year more water is sucked out, much more than nature will ever be able to provide without the help of the water pipeline.