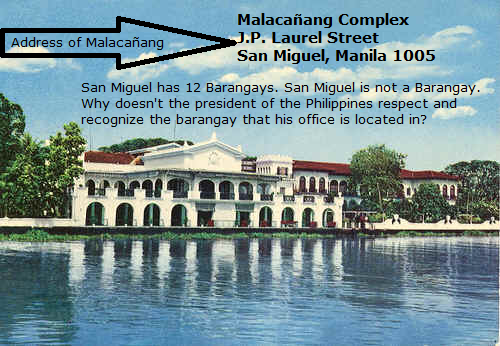 Here is an information that most Filipinos do not know. Every structure, every resource in the Philippines, and every citizen within the Philippines is within the barangay system. Yes, even the Malacañang Palace is within a barangay. Does the current president acknowledge or respect this fact? NO! Did the other presidents before him give this respect to the barangays? NO.

Most city halls and municipality halls, provincial capitols, government offices, hospitals, and businesses do not mention the barangay name within their addresses. The Filipino driver’s license asks only for the Street no., City or Municipality, and Province. The barangay name is disregarded. Only in a few cities do they “accidentally” place the barangay name as part of the address. But it is not an official mandate.

The Philippines department of tourism does not promote the barangays. All their promotions about the tourist spots or resorts rarely mention the name of the barangay where the resorts are located. Only the name of the city or municipality or province is mentioned. Yet that very same business can’t acquire a business license without a barangay clearance.

Here is a barangay who upon my recommendation, kagawad Alden Cabalfin convinced his barangay to create a resolution #8 on June 21, 2015: it reads as such:“A resolution that mandates every individual which includes all business, public and private organizations, institutions and other sectors which are resident and located at barangay Baguingin-Lanot to use the name of the barangay as compulsory in all lawful acts, transactions and other purposes” Baguingin-Lanot is the first barangay in the Philippines to create such a mandate. I sincerely hope that their example will be followed by all the 42,036 barangays and by the President of the Philippines.

The Philippines is uniquely organized, and its constitution empowers the smallest local government unit with its own COUNCIL. Even Barangay 630, Sampaloc, Manila, with a population of only 48 people as of 2010 census has a Barangay Chaiman/Captain and 7 councilors.
Every member of the council is elected by the registered voters of the barangay residents and each of these officials receive a monthly salary from the government. They are paid to serve the people.
There are 42,036 barangays in the Philippines as of the year 2015, which means that there are 42,036 “punong barangay” or barangay Captains.
These barangays belong to municipalities and cities and each municipality and city elects a barangay chairman/captain leader from the pool of barangay captains and the winner gets the title of “ ABC (Association of Barangays Council) President“. The ABC president then gets a position in the municipality/city council. This position gives him/her the same power as the rest of the elected city/municipality councilor and with the added bonus of the same yearly salary of a city/municipality councilor. This is a very powerful political position.
There are 1,634 ABC (Association of Barangay Council) presidents in the Philippines. Derived from the 1489 municipalities and 145 cities. Each of these ABC presidents have the power of a city/municipality councilor and has an office within the city/municipal council.
These group of ABC presidents are then de facto members of the “Liga ng Mga Barangays” or “League of Barangays of the Philippines”. These members then get together to elect the officers for this “Liga” or “League”. Then the officials of course get augmented salaries and traveling expenses for running this organization. This is one heck of a powerful government organization. Here is a link to its constitution and by-laws.
There is only one official “Liga ng Mga Barangays” government organization. However there are several Facebook pages for “Liga ng Mga Barangays”, here are some:
The salvation of the Philippines does not solely rest on the 3 main government branches of the government (executive, legislative and judicial). It also rest on the officials of the barangays. The barangay system is the main salvation of the Philippines. e.g. “Saving the rivers and lakes of the Philippines” , “The reforestation of the Philippines” and “Boosting the economy via tourism”.
Many are complaining that the budgetary system of the Philippines is centralized. That Metro Manila grabs most of the yearly budget. The fact of the matter is, the budgetary planning system of the Philippines is decentralized. Here is a link to the 130 page “Local Government Code of the Philippines of 1991”. It specifically states that “Toward this end, the State shall provide for a more responsive and accountable local government structure instituted through a system of decentralization whereby local government units shall be given more powers, authority, responsibilities, and resources.” Our provincial, City, Municipal and Barangay leaders simply need to enforce their authority over their autonomy.
The barangay officials are the true peace keepers of the Philippines. They have their fingers on the pulse of the nation.
Please pass this message on to as many as you can.

Help Zamboanga.com in this quest to empower the Barangays

Your help can come in many ways: