Daily examples of an English word and Chavacano word used in sentences:

In English: Search
In Chavacano: Busca 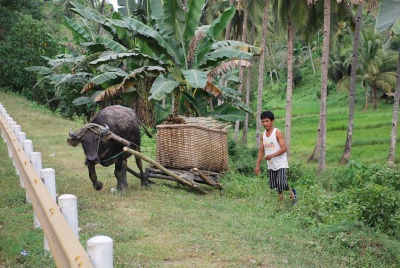 In Zamboanga City, the old-timers (specially those who write in chavacano) will be offended if you tell them that their language is chabacano instead of chavacano. To the new generation the words chabacano and chavacano are interchangeable. With that said, it’s time to put things into perspective.

The people of Zambaonga, being a proud bunch of people, who just helped the spaniards build the fort (June 23, 1635) and in the process developed the dialect, wanted to “own” this unique new language and hence baptized (coined) it as CHAVACANO. The word chabacano was derogatory. The people of Zamboanga were proud of their new language, the language of Chavacano. There is no mystery to this. The Zamboangueños simply wanted to own their own language.

The word CHAVACANO is only as old as the chavacano language itself. The word Chavacano is not a spanish word. The people of Zamboanga “coined” the word.

In the Philippines there were a handful of dialects that were developed in the areas where the spaniards had employed several indegenous people from different areas with different dialects. These workers had to communicate using the spanish language as the common denominator. These “new” dialects were referred to by the spaniards as CHABACANO, meaning “un-refined, coarse, or unpolished” form of spanish. Some call it “bastard” Spanish. The communities of Ternate – Ternateños, Ermita – Ermitaños, and Cavite City – Caviteños: did not “coin” their new found dialects. The dialects were called by the spaniards as the “Chabacano” of the spanish language and hence these communities proceeded to call their new dialects as “Chabacano”. No mystery there either.

The people of Zamboanga were unique. They coined the word “Chavacano” and they spread this new language to the new places they settled in later. Places, like Cotabato, Davao, and Basilan. The people in these areas referred to their language as CHAVACANO. The chavacano word identified the speaker as “originating” from Zamboanga.

I Frank Maletsky born, raised and educated in Zamboanga City speaks chavacano fluently. I created this FREE online chavacano wiki dictionary to enable any chavacano zamboangueño to contribute their knowledge of the chavacano language. Nobody can claim that they are the authority in the Chavacano language. We all need to collaborate to allow the language to survive, grow and evolve.

Celso Lobregat who was elected as a congressman of Zamboanga city in 1998 started to refer to the language of Chavacano in writing as chabacano contradicting his mother (Maria Clara Lorenzo Lobregat) who was mayor of Zamboanga City back then. He heard some of the people of zamboanga pronounce the letter “V” as “B” and thought that the word “chavacano” was spelled “chabacano”. Celso (born, raised and educated outside zamboanga city) is not a zamboangueño even though his mother was. When Celso became mayor (2004) he pushed for the change from chavacano to chabacano. To this date the government website of zamboanga city incorrectly refers to chavacano as chabacano. As of 2021 the City of Zamboanga is still under the political influence of Celso Lobregat, so the change from chabacano to chavacano will not likely happen. However, we at zamboanga.com and with other true zamboangueños will continue to push for the change so that the government website will start to refer to our beloved language as chavacano instead of chabacano. The government website of Zamboanga City INCORRECTLY refers to the Zamboangueño language as Chabacano

Let us begin the account by saying that as a result of continued Moro Pirate attacks on the Spanish controlled Visayas and Luzon Islands, a lingering plan to take possession of the strategic Mindanao peninsula and its town of Jambangan in the center of Moroland would be finally commenced at the urging of Bishop Fray Pedro of “Santissimo Nombre de Jesus” (Cebu) to the interim Governor-General of the Philippines, Don Juan Cerezo de Salamanca. >>>>Read More 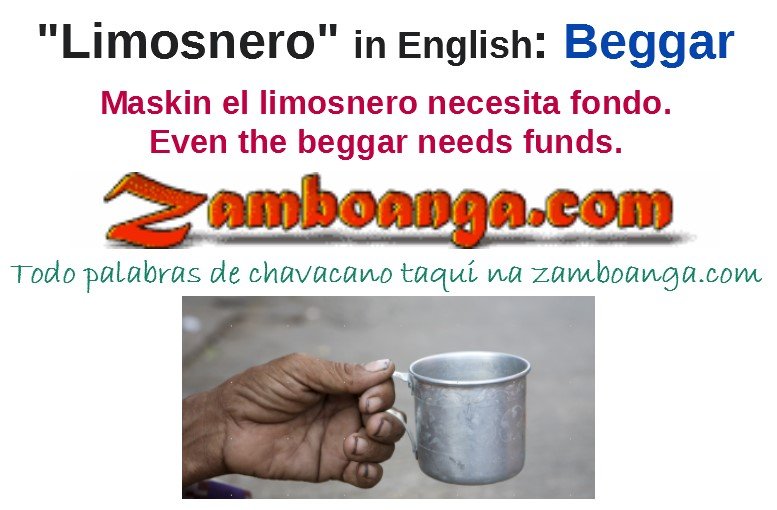 “Limosnero” in English: Beggar “Beggar” in Chavacano or chabacano is: Limosnero In English In Chavacano Even the beggar needs funds….

“Ajos” in English: Garlic Garlic in Chavacano or chabacano: Ajos In English In Chavacano It smells so good when you…

“Aire” in English: Air “Air” in Chavacano or chabacano is: Aire The ball is out of air. El bola no…