The Philippines violates the separation of church and state, a constitution mandate – Zamboanga Hermosa
Skip to content Menu Close

Not Islamophobia, just the truth. 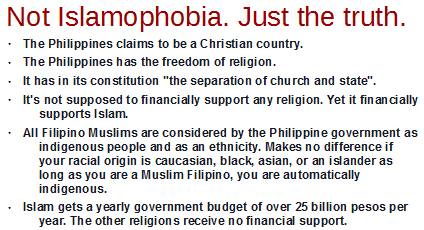 A Filipino(a) does not have to be born indigenous to be indigenous, just be a Muslim and he/she is automatically an indigenous Filipino. Amazing!

Their answer: “No, the government does not support Islam”. Then you ask them about the budget for the “ARMM (Bangsamoro) and NCMF”. Oh! they say. That’s ok because the Muslims are indigenous people here in the Philippines. OMG!!

The Philippines is the only country in the world (85% Catholic), that created five(5) laws “favoring”, “respecting” and “financing” the religion of Islam. Then made it unlawful to finance any other religion. The only country in the world that has a government commission that caters to Muslims only, for the hajj, for madrasas, and the spread of Islam at government’s expense, paid by the taxes of non-muslims.

Here is a Snapshot of the history of Islam in the Philippines.