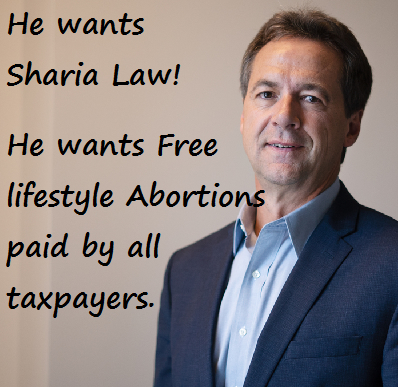 Gov. Steve Bullock of Montana wants to run for president in the 2020 USA presidential election. Of course he has to first win the democratic vote and be their chosen one.

If the democrats win, the new administration will be walking into an already revitalized government. Where the horror of immigration has been almost cured. And where the economy is booming.  What does the average american want? The average American wants a good opportunity for a job to support the family in a safe and secure country where Americans (citizens and residents) come first and not illegal aliens.

The democratic party will do their best to dismantle the great economy and pave the way towards socialism embracing totalitarianism and the adherence or acceptance of foreign law (sharia law) into our justice system. Last July 2019 California and its democratic backed government already voted down an extended health support for the 65 and older and while the session was still hot went ahead and voted to give free health care to illegal aliens.

In 2017 The legislature of Montana passed a law seeking to prevent the use of foreign law in state courts. Steve Bullock vetoed this law, favoring the Muslims and their Islamic laws. Read the anti-foreign law SB0199 for yourself and you will see that there isn’t a single text that targets Islam or the sharia law of the Muslims. It is totally about being against foreign laws that can be interpreted to undermine the justice system of Montana.  Sharia is a foreign law. So if that law passed, it would have blocked sharia law. Yet Steve Bullock vetoed it. He was lobbied by the supporters of sharia law and he cowered down to these Islamic groups.