The catholic church respects the "separation of church and state" as do all the other religions in the Philippines except for Islam. Islam does not 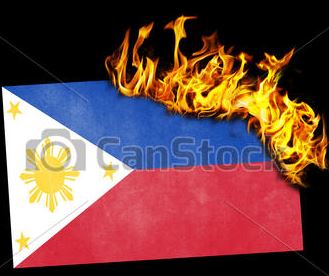 They burn the Philippine flag out of disrespect.

The Catholic church does try to influence the government, as all other organizations do. But that is as far as it gets. The catholic church respects the "separation of church and state".

A religion just as any organization or individual has the freedom of speech in the Philippines. A religion may be as corrupt as any politician can be, but as long as it is not financially supported from the coffers of the government or no laws have been created respecting that religion, the "separation of church and state" is still upheld.

If a religious leader is a pedophile, a rapist or a thief, he has committed a crime against the criminal law of the Philippines and if proven guilty under the due process of law, he must be punished accordingly. But this however, does not mean that the religion that the religious leader belongs to, violated the "separation of church and state". This is where most people even educated ones get confused.

On the other hand, Islam has

The Muslims are pampered by the government of the Philippines. Why? Too much money is being shoved down the throats of legislature to make them pass laws favoring Islam and for the law to ignore the violations to the constitution.

Since the independence of the Philippines:

Here is a snap shot of the history of Islam in the Philippines. After reading this, you will conclude that the Muslims are simply pretending to negotiate when all the while they want to take over.

This march forward will not stop until the Muslims will get what they want, the entire Philippines.

Note: These 4 presidents (Carlos Garcia, Diosdado Macapagal, Ferdinand Marcos, Corazon Aquino), within 30 years successfully undid what the Spaniards and the Americans accomplished in over 518 years.

The Muslims are always courting and bribing the president of the Philippines to get what they want. Gloria Macapagal Arroyo, successfully managed to allow the first introduction of the BBL. Then Benigno Aquino almost successfully passed the BBL into law. The current president Duterte does not talk about BBL anymore, he goes directly into Federalism. Federalism in the Philippines guarantees the Moros an Islamic Bangasamoro State.

ARTICLE X
BANGSAMORO JUSTICE SYSTEM
Shari’ah Judicial System, Section 4:
"Under Shari’ah, the penalties for Hudud, plural for Hadd (capital crime) which are seen as crimes against Allah (God) and Qisas, which are crimes against persons, are imposed in the Qur’an."