From Philippines
Jump to navigation Jump to search
Philippines News: December 14, 2019 -- The Philippines bows down to the terrorist group (MNLF) : President Rodrigo Duterte appointed Nur Misuari, founding chairman of the known terrorist group, the Moro National Liberation Front (MNLF) as the country’s Special Economic Envoy on Islamic Affairs to the Organization of Islamic Cooperation (OIC). As announced by the Office of the Presidential Adviser on the Peace Process (OPAPP) last December 14, 2019.. .... More

Pasonanca became a barangay of Zamboanga city upon the enactment of Commonwealth Act No. 39, s. in 1937. It is one of the 98 Barangays of Zamboanga City.

When roads need to be built or any infrastructure within the barangay is needed, all the barangay officials have to do is make a resolution and demand for it from the city or municipality council. The resolution will force the city/municipal council or responsible government office to hear the legitimate demands. "The squeaky wheel gets the grease."

Cleaning the shorelines, drainage systems, streets, rivers, and parks within your barangay is YOUR responsibility. You are accountable for this. It is not the responsibility of the City/Municipality officials. The citizens and officials of the barangay are responsible.

Real Estate or Properties for Sale or lease in Pasonanca, Zamboanga City

Churches, Mosques, or Places of Worship in Pasonanca, Zamboanga City

Due to Covid19: Pursuant to the instructions of President Roa Duterte, and as recommended by the DepEd, the opening of classes for the year 2020-2021 is deferred to October 5, 2020.

The economy of Pasonanca, Zamboanga City, Philippines is booming. There are always new construction going on.

The number one tourist attraction of Pasonanca is the Pasonanca Park.

Pasonanca Tree House: The pasonanca tree house is visited by thousands of visitor per year. For a minimum fee you can rent this tree house. Then you can boast to your friends that you spent the night in a tree house. It has all the amenities of a small motel room. Originally constructed to be the "Youth Citizenship Training Center" in April of 1960 with the generous assistance of the city council.

Pasonanca to this date continues to represent the beautiful side of Zamboanga City. 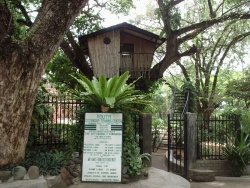 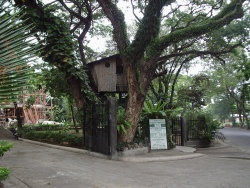 
From the heart of an Acacia tree
Come these words from me to thee
In a tree-house I now stay
My third day, out Zamboanga way.


Beyond shines the Celebes Sea
while close around "my" tree
Brilliant bougainvilla reaches up to me.


The rainbow tips a bird's wing
While friendly Filipino voices sing.
In pretty Pasonanca Park
Where Tree-House living is a lark
A stream-fed pool
Invites a swim that's cool.


There's room for two
But one alone "can do"
With frig and lights
And comfort for all rites.


How much: much No price!
It's just to be nice
To City Guests who stay
Out Zamboanga way.


But of pesos -- leave a few
La Lavandera will wash for you.


This sweet little scheme
For enchantment - whose dream?
That of Cesar Climaco, a mayor
With imagination of his mind plus hair.


For every visitor out Zamboanga Way
This my heart is glad to say.

During the Christian holiday of Holy Week, thousands of people visit the holy cross near the top of Mt. Kulom Bato(Column of stone) . On the way to the top about 50 to 75 meters apart are the 14 stations of the cross where the christian faithful can pray or rest.

Pasonanca celebrates it's Fiesta every ninth Sunday after Easter Sunday. Feast of the Holy Trinity.

Your Story about Pasonanca, Zamboanga City

List of Families whose names are deeply rooted in the barangay of Pasonanca.