Contribute your knowledge about the history of Miputak 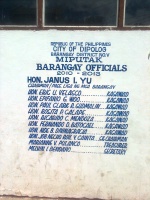 Do you know who the oldest man or woman is in Miputak? Zamboanga.com is starting this inquiry in order to honor the older generation of the Philippines. Please provide the full name and date of birth of the elder living in Miputak. We will then post your entry in the Oldest Man or Woman in the Philippines page.

P308-M agri projects in Benguet, Ifugao OK’d.
BAGUIO CITY – The Cordillera Regional Project Advisory Board (RPAB) of the Philippine Rural Development Project (PRDP) under the Department of Agriculture (DA) has approved and endorsed four sub-projects that aim to further boost agriculture in the region. Dr. Cameron Odsey, regional director of the DA-Cordillera Administration Region (CAR) and DA-PRDP regional board chairman, said the projects approved during the board meeting last Sept. 30 include the PHP8.025-million hauling and delivery services of a farmer's cooperative in Kabayan, Benguet; the construction of Central Mayoyao Level II potable water system (PWS) worth PHP95.089 million; construction of Aguinaldo Level II PWS worth PHP17.939 million; and the Improvement of Pula-Cawayan-Camadag farm-to-market road (FMR) with bridge in Asipulo, Ifugao costing PHP186.993 million.

NegOcc LGUs urged to activate drinking water monitoring bodies
BACOLOD CITY – The Provincial Health Office (PHO) here urged local government units (LGUs) in Negros Occidental to activate their local drinking water quality monitoring committees (LDWQMCs) following confirmed cases of cholera in at least three localities in the province. As of Monday, seven cases of cholera, an acute diarrheal infection caused by ingesting contaminated food or water, have been reported, including five in Silay City, along with one each in neighboring Victorias City and E.B. Magalona town.