Philippines News: December 14, 2019 -- The Philippines bows down to the terrorist group (MNLF) : President Rodrigo Duterte appointed Nur Misuari, founding chairman of the known terrorist group, the Moro National Liberation Front (MNLF) as the country’s Special Economic Envoy on Islamic Affairs to the Organization of Islamic Cooperation (OIC). As announced by the Office of the Presidential Adviser on the Peace Process (OPAPP) last December 14, 2019.. .... More

The place Mampang became a barangay of the city upon the enactment of Commonwealth Act No. 39, s. 1937. It is one of the 98 barangays of the City of Zamboanga.

The only tale in existence that tells how Mampang got its name is that which parents are called by their children, a dearly name fondly addressed to a mother and father especially Zamboangueños.

It was hundred of years ago when the Spaniards landed in Zamboanga. After establishing a permanent settlement in the poblacion, the Spanish conquistadores attempted to look for other areas where to settle. In one of these attempts, a Spanish officer came to a thick forested mangrove after cruising in a banca along the eastern shores of Zamboanga.

It was low tide thus; they had to walk on land. While walking through the bushes, they saw a native girl picking up tops of bushes. The Spanish officer asked the girl the name of the place in Spanish, “Hija, que se llama este lugar?” The girl, frightened upon seeing the strangers in uniform for the first time, shouted “Mang…Pang…” which later on came to be known as the name of the barangay.

The residents of Mampang today are proud of this name of their Barangay. With pride, they consider their barangay as the only barangay in the archipelago created and named out of their love for their parents. That it came into existence because of the union of our Mama and Papa and the dearly name fondly called to our mother and father. 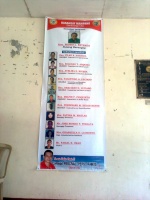 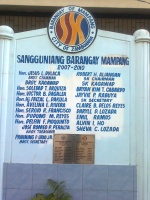 Mampang is diversified when it comes to Religious practice

Your Story about Mampang, Zamboanga City