Maria Leonor "Leni" Gerona Robredo (born Maria Leonor Santo Tomas Gerona; April 23, 1965) is a Filipino lawyer, politician, and social activist who is the 14th and incumbent vice president of the Philippines. Robredo was the wife of the late interior secretary Jesse Robredo. She served as the representative of Camarines Sur's 3rd district from 2013 until her inauguration as vice president in 2016. In the vice presidential election, Robredo defeated Bongbong Marcos by a narrow margin of 263,473 votes. A report released by the Supreme Court further widened her lead to 278,566 over Marcos.

Robredo is the second woman to serve as vice president of the Philippines after Gloria Macapagal Arroyo and the first vice president from Bicol Region. In 2016, Robredo was awarded by the government of Thailand for her work and advocacy in women's empowerment and gender equality. Under her leadership, the Office of the Vice President also received the ISO 9001: 2015 certification for the office's quality management systems.

On October 7, 2021, Robredo announced her bid for president of the Philippines in the 2022 election.

Leni Gerona attended the basic education department of Universidad de Sta. Isabel in Naga, graduating from elementary school in 1978, and from high school in 1982. She earned her degree in economics from the University of the Philippines Diliman in 1986, and proceeded to study law at the University of Nueva Caceres, graduating in 1992. She passed the bar exams in 1997.

Gerona chose to temporarily forego law studies and instead decided to work as a researcher for the Bicol River Basin Development Program (BRBDP), a government agency tasked with integrated area development planning in the three provinces of the Bicol Region. Here she met then-Program Director Jesse Robredo, who would eventually become her husband.

Having passed the bar on her second attempt in 1996 and admitted in May 1997, Robredo served in the Public Attorney's Office, a role in which she often took up the defense for cases pursued by her husband, who by then had become Mayor of Naga.

From 1998 to 2008, Robredo became the coordinator of Sentro ng Alternatibong Lingap Panligan (SALIGAN), a Naga-based alternative legal support group. SALIGAN's work aimed to encourage young legal professionals to take on leadership roles, and involved visiting distant rural communities to provide legal services to residents who would otherwise have little or no access to such services, as well as conducting legal advocacy by proposing amendments and new laws based on the needs of these marginalized communities. Later, the group's focus shifted to include helping rural women to acquire capital in order to participate in competitive markets.

In addition, Robredo founded the Lakas ng Kababaihan ng Naga Federation, an organization that provides training and livelihood opportunities for women, in 1989.

In 2012, Robredo was named the chairperson of the Liberal Party in Camarines Sur. 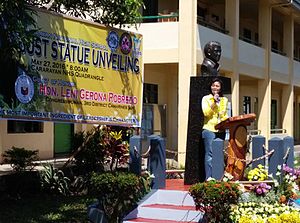 Leni Robredo unveiling the Jesse Robredo Monument at the Cararayan National High School in Naga, May 27, 2016 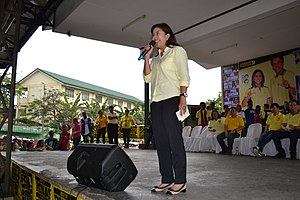 Robredo delivering a speech during a LP campaign rally in Quezon City, February 17, 2016

Participatory governance and transparency were the major objectives and thrusts of Robredo's legislative agenda. The first law Robredo authored in congress was the Full Disclosure Policy Bill (HB 19), which would have mandated all government agencies and their sub-units and projects to disclose their budget and financial transactions in a conspicuous manner "without any requests from the public."<ref>Template:Cite news</ref> Concerned that the marginalized sector should not be denied access to government frontline services and public meetings based on their attire,<ref>Template:Cite web</ref> she sponsored the Open Door Policy Act (House Bill No. 6286),<ref name="HB6286">Template:Cite web</ref> which prohibits government offices and agencies from implementing strict dress codes.<ref name="HB6286"/>

Robredo was also a key supporter of: HB 4911: People Empowerment Bill to create a partnership between local governments and civil society through the establishment of a people's council in every local government unit. This act also prescribes the powers and functions of said council; HB 3432: Comprehensive Anti-Discrimination to prohibit discrimination on the basis of ethnicity, race, religion or belief, sex, gender, sexual orientation, gender identity and expressions, language, disability, HIV status, and other status, and provide penalties for these; HB 4021: Healthy Beverage Options to regulate the availability of beverages to children in schools and for other purposes; HB 19: Full Disclosure Policy to require the full disclosure of all information on fiscal management from all national government departments, bureaus, agencies, and other instrumentalities, including government-owned or controlled corporations and their subsidiaries and local governments. This act will also provide penalties for violations of said requirements; HB 3905: Participatory Budget Process to institutionalize citizens’ participation in the budget process and for other processes; and HB 3237: Freedom of Information to strengthen the right of citizens to information held by the government.

Template:Infobox President stylesOn October 5, 2015, after her three daughters set aside their initial objections, Robredo announced that she would run for the post of Vice President of the Philippines under the Liberal Party in the 2016 election, as the running mate of presidential candidate Mar Roxas.<ref name="RAPPLERrunning">Template:Cite news</ref> Robredo won the election with 14,418,817 votes, or 35.11 percent of cast ballots, narrowly defeating her closest rival, Senator Ferdinand Marcos, Jr, by 263,473 votes or by 0.64 percent.<ref name="Inquirer 1">Template:Cite news</ref>

Robredo was sworn in as Vice President of the Philippines on June 30, 2016, at the Quezon City Reception House, which she had since used as her office.<ref>Template:Cite news</ref> 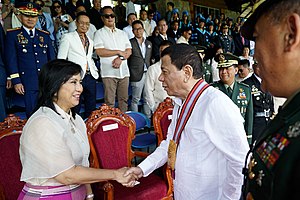 On December 4, 2016, Robredo was informed by Cabinet Secretary Leoncio Evasco Jr. "to desist from attending all Cabinet meetings starting December 5", which prompted her to release a statement tendering her resignation as the chairwoman of the Housing and Urban Development Coordinating Council, effective the following day.<ref>Template:Cite news</ref>

Robredo has spearheaded programs under the Office of the Vice President (OVP). As of January 2022, her flagship anti-poverty program Angat Buhay has benefitted 622,000 families in 223 cities and municipalities across the country since she assumed office in 2016. P520 million worth of aid has been mobilized for the program, mostly from donations by the private sector. The OVP under Robredo has partnered with 372 organizations in the implementation of Angat Buhay. The Angat Buhay program focuses on six key advocacy areas, namely: public education, rural development, food security and nutrition, women empowerment, universal healthcare, and housing and resettlement.<ref>Template:Cite web</ref>

In October 2017, the Senate increased the 2018 budget of the Office of the Vice President (OVP) by ₱20 million, which was allotted for the vice president's Angat Buhay program.<ref name="rappler.com">Template:Cite news</ref> In the same month, Robredo called on fellow Filipinos to remember the 165 soldiers and police who gave their lives for the liberation of Marawi City. Robredo said her office was already preparing to help in the rehabilitation of Marawi City, primarily through its flagship anti-poverty program.<ref>Template:Cite news</ref>

Robredo has been a constant victim of memes and "fake news" articles since taking office in 2016, some of which she claims emanate from a Senate source. Dealing with these, she said, was a "test of character". Numerous fake news stories have been manufactured on Facebook, Twitter, YouTube, and other blog sites against Robredo after she won the vice presidency in 2016, a portion of which were fabricated by pro-Duterte bloggers. Robredo has demonstrated the falsehood of these statements against her.

Robredo's winning margin of 0.61% is the closest margin since Fernando Lopez's victory in the 1965 vice presidential election. Her opponent, Bongbong Marcos, filed an electoral protest on June 29, 2016, a day before inauguration. On February 16, 2021, the PET unanimously dismissed Marcos' electoral protest against Robredo.

Robredo officially announced her campaign for president of the Philippines on October 7, 2021, the day she filed her certificate of candidacy before the Commission on Elections as an independent candidate despite her being the party leader of the Liberal Party of the Philippines. Hours after the announcement, a source from Robredo's camp revealed that she had selected senator and Liberal Party president Francis Pangilinan as her running mate.

Martial law: During the Marawi siege, Robredo called for unity as government troops engaged in a firefight against the Maute group in Marawi, and she organized donations and directed relief operations for the victims. She then visited wounded soldiers in Iligan to give support and contributions. Robredo respects President Duterte's implementation of martial law in the whole of Mindanao as a way to combat terrorism, but has requested measures to ensure that the implementation would not resemble the "abuses and violations" during Ferdinand Marcos' implementation of Proclamation No. 1081. She also questioned the coverage and prolongation of the implementation and called on members of the Congress to review and validate the implementation as a "constitutional duty". Robredo said that the martial law in Mindanao has failed to address threats in the region. On November 26, 2019, Robredo called on the government to assure that troop deployments in Samar, Negros, and Bicol would not lead to martial law.

Political dynasties: Robredo voiced her support for the proposed anti-turncoat law in the House.[98] During her congressional career, she co-authored the Anti-Dynasty Bill.

Leni was married to Jesse Robredo, whom she met while working at the Bicol River Basin Development Program, from 1987 until his death from a plane crash in 2012. The couple has three daughters: Jessica Marie "Aika" Robredo, Janine Patricia "Tricia" Robredo, and Jillian Therese Robredo.[6][11] Their eldest daughter, Aika, was an executive assistant at the Office of Civil Defense, while their second eldest, Tricia, is a licensed physician and was a UAAP basketball sideline reporter for National University.[101][102][103] Their youngest, Jilian, is currently studying biomolecular science.

Since May 14, 2017, Robredo hosts her own public service radio program entitled BISErbisyong LENI, aired on DZXL.[107]

On August 1, 2016, Robredo was awarded the Honorary Outstanding Woman Award of the Year 2016 by the Thai government, coinciding with Thailand's Women's Day. The recognition was given to Robredo for her work and advocacy on women's empowerment and gender equality.

On August 23, 2016, Robredo was awarded the Most Influential Filipina Woman of the World award by Filipina Women's Network (FWN), a non-government organization.

This page was copied verbatim from Wikipedia