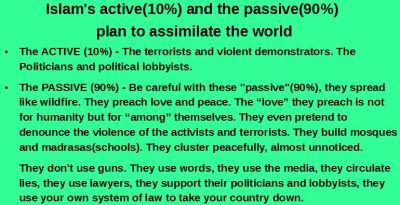 Religions have several types of followers but Islam only has two:
☪ The ACTIVE (10%) of Islam.
☪ The PASSIVE (90%) of Islam.
Be careful with those who belong to the "passive"(90%), they spread like wildfire and they can be active at anytime. This 90% quietly support the causes of the "political lobbyists", they sign the petitions, they vote for their "muslim candidates", they are the lifeline of the 10%. They preach "peace and love". They recite the peaceful quotations from the Quran. They build mosques and madrasas. They cluster peacefully, almost unnoticed. They do not spread out. They cluster for community strength. They make it uncomfortable for outsiders (non-muslims) to visit their cluster.

Clustering is the foundation for assimilation. Within their cluster they strengthen the practice of sharia (Islamic law). They establish halal(frequently applied to permissible food and drinks) mini-groceries. It looks innocent enough but they also pressure out haram(forbidden) outlets. This is a gradual process.

Everybody needs food to survive. Making the food source of the community "halal" is the prime objective. The school systems will be lobbied to have halal food served in cafeterias. Business that sell "haram" (not halal) products are gradually harassed, and ultimately they move out, leaving only business for "halal" products.

Who are these 90% of Islam? They are your neighbors, you grow up with them, they are your relatives, friends, classmates, co-workers, and they are the "peaceful" Muslims. They may not follow 100% the sharia law but they support it. You see them peacefully walking down the streets. You may even hear some of these 90% contradict the activities of the "muslim terrorists". They will even say vehemently that terrorism is against their religion. They will join human rights activists group and give speeches about islamophobia, bigotry, prejudice and racism. They will join non-muslim religious organization and promote peace to show "solidarity". They won't physically harm or talk bad about anyone but they support 100% those other Muslims who will destroy your families and kill you. If you believe in their "good cop, bad cop" routine, your country is doomed for assimilation.

What is the definition of HUMAN RIGHTS in Islam? To the Muslim it is simple. Sharia law or Quranic Law defines "human rights". The Muslim league of nations (57) under the name of Organisation of Islamic Cooperation adopted this definition. They are 1.9 billion strong and growing.

The "active 10% of Islam" fall under three categories:
✔ The violent radicals (those who choose violence as their means of assimilation)
✔ The protesters-demonstrators who rally
✔ The political lobbyists, elected politicians, men in power and influence.


We call the violent radicals terrorists. They don't really do the most damage to countries because they are targets. You can go to war with them with your military.

The most damage is done by the "political lobbyists" and politicians, they are the ones who can change the country from within. These politicians and lobbyists are fueled by the "rallyists" and protesters-demonstrators. The "political lobbyists", "politicians", "rallyists" don't use guns. They use words, they use the media, they circulate lies, they use lawyers, they use politics, they use your own system of law to take you down. They infiltrate the educational system. They become teachers, professors, administrators and get voted into school boards where they can do the most damage by allowing Islam to infiltrate and be part of the school system. They are the mentors of young Muslim attorneys who infiltrate the Judicial system. Once these Muslim lawyers become judges in the non-muslim countries then the next step is to make it smooth as silk to pass Sharia law.

All around the world you will once-in-a-while see these 90% demonstrating for "PEACE" and condemning the activities of any recent terrorist activities. They will say to the media that these terrorist activities in the name of Islam is wrong and that Islam is a religion of peace and love. People who are naive will see and listen to this and think that in fact what they are saying is the "truth". Nahhh! They got you. Hook line and sinker. Islam preaches Love to be only among themselves (the Muslims). Infidels are simply to be tolerated. Why do Muslims teach and emphasize tolerance? They teach the world to be tolerant? Why?

They teach NON-MUSLIMS to be tolerant because:
✅ They have the upper hand or the advantageous position.
✅ They are the bullies, the users, the abusers, the pushers.
✅ They impose their will or opinion upon you. They deprive.
✅ They make you accept what is unfair, unjust or wrong.
✅ They want you to be submissive and to leave it to God.
✅ They tell you to “turn the other cheek” or be “politically correct”.
✅ They allow others to take what is yours and tell you that it is OK.
They tell Muslims to be tolerant because:
✅ The infidels are more powerful.
✅ They can't win YET. They are not getting what they want. They wait for the opportunity to DOMINATE.


They teach TOLERANCE to achieve DOMINANCE.

Sharia law is a great weapon of the Muslims. Sharia law allows men to practice polygamy and own women. Women are the possessions of men. Possessing submissive women is attractive to men. Islam is a religion invented for Men, for dominance over humanity. It is a men's club. Islam is very attractive to men.

Why do Muslim women wear the hijab, nijab or burka?

The #2 reason for muslim women to wear the hijab, nijab or burka is because they were told to do so. Those who were born into Islam were taught since childhood that women must be covered up, so as not to "tempt" men. They may define this with all sorts of different terms and one of them would be modesty. Nothing wrong with that. But it still boils down to this main reason as to why men make muslim women cover up, and that is to prevent men from being sexually aroused.

You will read all kinds of articles about all sorts of reasons for muslim women wearing the hijab. The favorite one is: "It is my right, my choice and it is my life". All these explanations are touching basic truths, but they are all trying to make you forget about the #1 and #2 reasons as to why muslim women wear the hijab, nijab or burka.

Hijabs worn by non-muslim women in christchurch new zealand to show solidarity towards islam after tragic incident last March 15, 2019.
This women can show their condolences and compassion without bowing down to the religion of Islam.

There is a "STUPID" trend going on and the majority of non-muslim women are bowing to this: Non-Muslim women must wear the Hijab in Muslim countries or in institutions run by Muslims. Only a few headstrong women refuse to bend to the will of Islam. Nazí Paikidze-Barnes, 2016 U.S. women's chess champion, boycotted the Women's World Chess Championship of 2017 in Tehran, Iran due to its hijab dress code. She said, "I will not wear a hijab and support women’s oppression. Even if it means missing one of the most important competitions of my career."

There are Muslim women who do not wear the head coverings. Does that mean that they are liberated? NO! They are still bound to the laws of Sharia. Bound to OBEY the "man". Bound to the words of the imam.

Islam is a religion invented for Men, for dominance over humanity. It is a men's club. Islam is very attractive to men.

The conformity of non-muslims will lead to their subjugation.

In most countries "Faith Schools" or "Religious Schools" have strict dress codes. Specially for girls. Most of these schools have strict uniform policy of no "head-wear or scarfs". Just as Muslim schools (madrasas) require girls to wear headscarves or hijabs.

Now the Philippines which is a country populated by over 80% Catholics have many religious schools and all the religious schools have strict uniform or dress code. "No head-wear or scarfs". Then starting in 2011 Muslim girls became bold and began wearing hijabs to school. They were told to remove them. They protested. Muslims leaders were angry claiming that the rule violates their religious rights. Mind you, before they enrolled, they were told about the rules and they agreed to abide by these rules. The protest went on for almost 3 years. The National Commission on Muslims Filipinos (a lobbying group for muslims only paid by the government) stepped in to protect the "rights" of the muslims. Since the ncmf is a government commission and financed by the government to only serve Muslims, the Catholic church and all other religions succumbed to the will of Islam. Now Muslim girls in the Philippines are allowed to wear the HIJAB in any school in the Philippines. However, non-muslims students who wear headgear, head-wear or headdress to school are still being reprimanded. That's the power of Islam over the government of the Philippines. No other religion has that kind of power or influence.

June 26, 2018 The Netherlands passed a law to ban face-covering veils in some public spaces. Making nijabs and burkas unlawful. The liberals (infidels - not muslims) have already found a way not to implement the law by simply saying that the police will not be able to respond to complaints within the 30 minute time as suggested by police procedures.