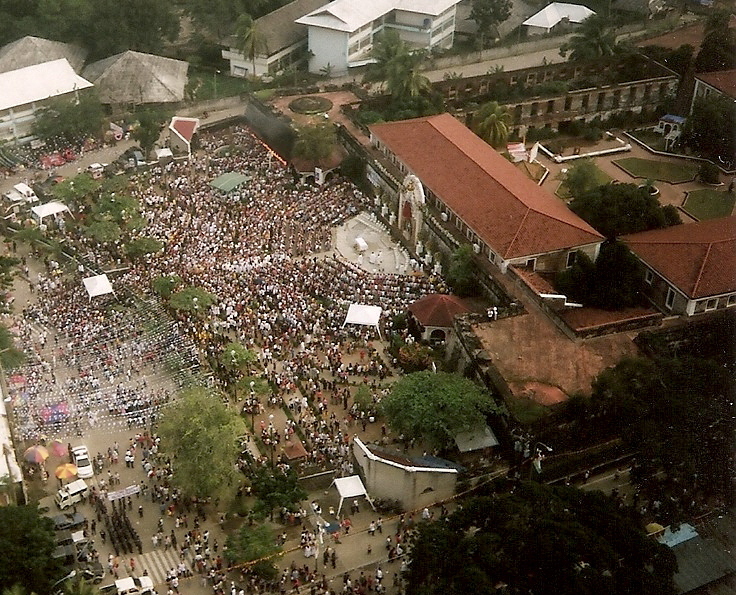 Photo courtesy of: panoramio.com/photo/365775
by Eduard Basille M. Re…

The early 1500s brought along the Spaniards and their Catholic religion into the Philippine Islands, in search of spices and riches. The Spanish's recorded presence in Jambangan can be dated as far back as November 1596, when a small Spanish settlement and garrison was established in the port of La Caldera, the present-day Caldera Bay area barrio called Recodo, located about fifteen miles north-east of present downtown Zamboanga City. Captain Don Juan Ronquillo del Castillo built a presidio with a fort (La Caldera Fort) as the base of their operations in Mindanao and against the Cotabato Moros (the Buhahayens, and their alliance with the king of Terrenate, Moluccas) after withdrawing from the Tampacan and Lumaguan area (present-day Cotabato), and burning their fort and settlement there (which was founded by Captain Estevan Rodriguez de Figueroa in February, 1596), then left Captain Juan Pacho (or Paches) behind to man it before returning to Manila. Read On

In the 1600s, Jambangan would experience its transition from the Muslim community it has become into the Catholic dominated city it is today. In 1635, Don Juan Cerezo de Salamanca, interim Governor-General of the Philippines, received reports relative to the Moro power concentrated near the site of the present downtown of Zamboanga. During that year, Padre Juan Batista Vilancio, who had been for years a captive in Jolo, escaped to Manila and brought to the ears of the Governor-General an account of the town where "the nobility of Mindanao held court.

Governor Salamanca resolved to take possession of this strategic peninsula, hoping in this manner to strike a heavy blow on to the Moro power. A fortress in Jambangan would command the Basilan Straight, the waters of which were the ordinary course of the Moro pirate vessels infesting the coasts of the Visayas. The region of Jambangan, while not as important as the seats of the Sultans of Sulu and Mindanao, was nevertheless the territory of a minor Moro king whose authority reached along both sides of the peninsula for a hundred miles on either side. Salamanca hoped to divide this unbroken front and his efforts would prove successful.

Thirty-seven (37) years after the ill-advised destruction of their La Caldera Presidio and Mission, the coffers of the Manila-centric Filipinas Spanish government is once again enriched and well-supplied with new troops from Nueva España and other native settlements in the Visayas and Luzon islands, who have suffered tremendous losses from the Moro attacks on their villages, leading to a more concerted effort in restoring their important sentry in the Mindanao island peninsula.

After due preparation for their voyage, a conquering force of 300 well armed Spaniards from Luzon and 1,000 Cebuanos under the command of Captain Juan de Chaves landed at Jambangan on April 6, 1635. There, de Chaves temporarily founded the town of Bagumbayan, which was the first Spanish-given name for Jambangan, and from this station he soon attacked and cleared the town of La Caldera, now barrio Recodo in Caldera Bay, and eventually the rest of the Jambangan peninsula, of Moro Pirates. Their two-month long campaign would provide them a temporary relief from the Moro Pirates and allow them to start construction on the fort.

Soon, the construction of one of the finest and most important Spanish forts in the East was put into effect. Upon careful choice of locating the fort at the southern-most tip of the peninsula for its military vantage point of the main water routes that converges in what's called today the Basilan Straights, the foundation of the grand fortress of Fuerza de San José was laid by Father Melchor de Vera, a Jesuit priest and engineer of the Spanish army, on June 23, 1635, establishing a permanent Spanish presence here brick-by-brick.2 Zamboanga City, as we know it today, was thus born. Read On]

The following 13 pages uses this file:

This file contains additional information, probably added from the digital camera or scanner used to create or digitize it. If the file has been modified from its original state, some details may not fully reflect the modified file.
Retrieved from "https://zamboanga.com/z/index.php?title=File:Zamboanga_city_fort_pilar.jpg&oldid=735136"
Categories: