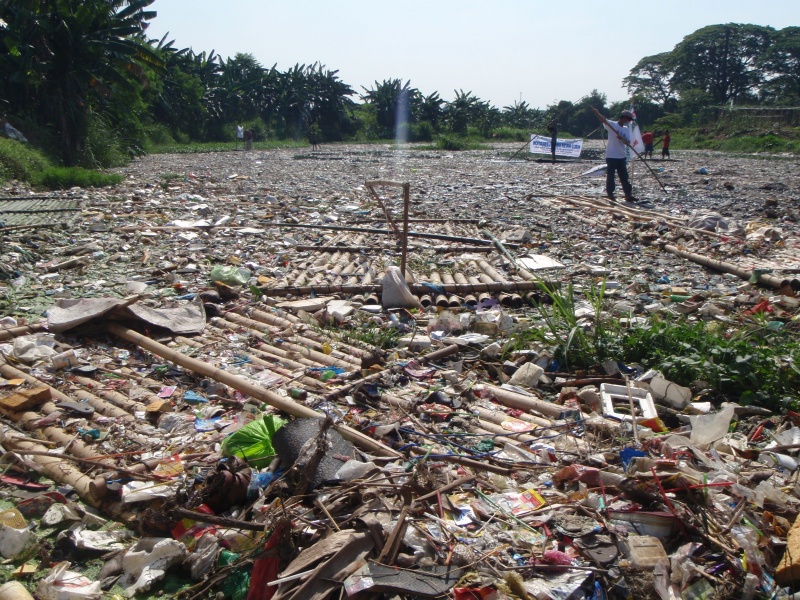 Protect and Save The Rivers and Lakes of the Philippines. They are Dying

The Rivers of the Philippines

Efforts to Clean the Rivers of the Philippines

Protect & Save the Rivers. Do not let your sewer drain into the river. Your community can be the first to initiate this project.
Build your riverbank protection with a built-in gutter system.

There is one fact that everybody knows from young children to old men and women; Nature cleans itself. Yes it does. In the case of the Philippines, mother nature tries very hard. We all know that every year during the rainy season the floods cleanse the river systems of the Philippines. This is a yearly purge that Mother nature does. But it does not stay clean for long.

The political leaders and top-notch government officials usually right before the rainy season come along (last week of April), will go on a campaign to clean the rivers. Plenty of volunteers, clubs, associations will be involved. There will be lots of picture taking and publication. They will do some work knowing full well that Mother Nature will be right behind to clean-up the rest. Generally the rainy season in the Philippines starts in the month of May or June.

The efforts of these leaders are good and all mean well, but they do not solve the problem. Because right after the clean-up efforts the people (including some of those who volunteered) go back to their old bad habits of throwing their garbage in the river and flushing their sewers into the gutters that empty into the Rivers. This continues on and on and on. Then the following year the government officials campaign again to clean the rivers and the cycle repeats itself.

When will they ever learn?

Save the Lakes of the Philippines

Save Laguna de Bay from Pollution and Sewer Drainage

Laguna de Bay is surrounded by highly populated and urban communities, most of which drain their sewer systems in the lake. 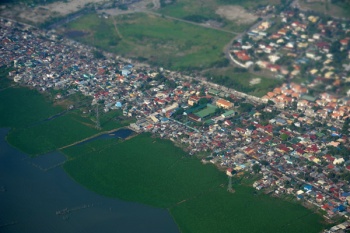 article below copied verbatim from :http://www.britannica.com/EBchecked/topic/56646/Laguna-de-Bay

Laguna de Bay, lake, the largest inland body of water in the Philippines, on Luzon just southeast of Manila. Probably a former arm or extension of Manila Bay cut off by volcanism, Laguna de Bay (Spanish: “Lake of the Bay”) has a normal area of about 356 square miles (922 square km) and is about 32 miles (51 km) long. Its shallow, crescent-shaped basin is poorly drained by many small streams, and the surrounding low-lying plains are inundated during seasons of heavy rainfall. The Pasig River is the lake’s outlet to Manila Bay, 10 miles (16 km) northwest. An important fishing area, with productive wet margins (rice), Laguna de Bay is broken by two peninsulas in the north and dotted by islands; densely settled Talim (9 miles [14 km] long) is the largest. Santa Cruz, Biñan, and Calamba are towns on the lake’s southern shore.

The housing development you see above in the aerial picture drain their sewer into the bay, gradually polluting and killing the bay. Installing a gutter system around the bay will help solve the pollution problem of the bay. 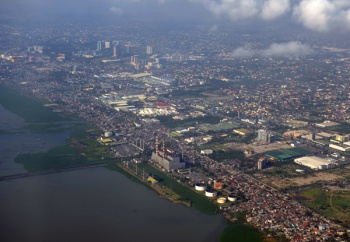 What the leaders of the Philippines are saying

There is a law in the Philippines that protect the river banks
DENR Administrative Order No. 97-05: In the interest of the service and in order to promote ecological balance and protection of the environment, the provisions of R.A. No. 1273, P.D. No. 705 (as amended ) and P.D. No. 1067 shall be strictly implemented. 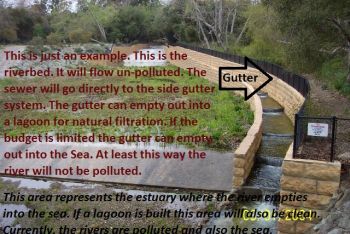 Here are two examples as why you should write: No mention of a sewer system in any of the funding.

If you have any comments or suggestions please contact the founder of zamboanga.com
Franklin H. Maletsky and his email is: franklin_maletsky@yahoo.com

The Solution is so simple: Yet the DENR continues to ignore it

Rehabilitate the Pasig River and the Laguna de Bay lake

There are so many articles written about the rehabilitation of the Pasig River. Many attempts are made to clean the pasig river. The Philippine government talks the talk but can't walk the walk even with the help from international funds to clean the river.

Believe it or not the Philippine government created a "commission" called the Pasig River Rehabilitation Commission (PRRC). This commission was created in 1999 by virtue of Executive Order No. 54, as amended by executive Order No. 65. Fourteen (14) years later not much has been done. The organization does not have a whole lot of success stories to showcase the things that they have accomplished.

Here is a "success" story that the PRRC has in their website. This is great and hopefully there will be more, but they did not address the sewer system problem. The sewer continues to drain into the pasig river and continues to kill it.

The pasig river continues to get more and more polluted as the population of the communities nearby increases.

Let us remember one thing and always bear this in mind: "We pollute". People generate pollution. If we start with that concept we are going to find the solution. In our current society, the people are completely dependent on the structure of the government. Just take these two instances: garbage and sewer. If the government does not provide the weekly garbage pick up and proper drainage of sewer, where in the world will the poor living along the pasig river drain their sewer and throw their garbage? This river is 27 kilometers long and every bit of it on either side of the river is populated.

I suggested the river gutter system to many denr officials and also to the PRRC back in 2012 but to this date there has been no reply from them.

As of 2016 the Pasig river continues to be the #1 sewer system of the Philippines.

Participate in this Facebook discussion regarding the rehabilitation of the Pasig river.

Some of the longest rivers in the Philippines

The following 8 pages use this file: