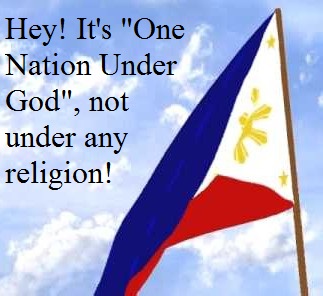 The Philippines continues to violate its constitution by not upholding the Separation of Church and State. Not a single senator or congressman will stand up against the government's financing of the religion of Islam. Even the Catholic church accepts this. The Jesuit priests even stepped forward and endorsed the Bangsamoro (an Islamic region). The Philippines became a country of submissive people. Submissive to the religion of Islam.

Yet the Muslims cry "ISLAMOPHOBIA". Even most of the Non-Muslims (enablers) are on this band-wagon.

Freedom of religion is a must, as is guaranteed by the constitution but the financing of the religion of Islam must stop.

Worst of all, they all seem to think that the "freedom of religion" is tantamount to the "separation of church and state".

The Philippines violates the Separation of Church and State in its 1987 Constitution1.

The teaching of religious classes in public schools is permitted with the written consent of the parent so long as it is provided that there is no cost to the government. Religious organizations register with the Securities and Exchange Commission to apply for tax exemption. Registered religions and non-profit organizations are tax exempt but only with the concurrence of a majority of all the Members of the Congress.

Note: The developer of this site (Frank Maletsky), is appealing to all of academia, political leaders, and other religious leaders to say something about this. Whether you are for this violation or against it. Say something. Why does the Philippines favor one religion (ISLAM) over the rest?

As defined by international dictionaries and google: Moro is a Muslim of the Philippines. Muslims are Moros and Moros are Muslims and they are followers of the religion of Islam.

Muslims are not indigenous people. Muslims belong to the religion of Islam. Muslims are comprised of different cultures, races, and different ethnicities all over the world. It is unfortunate that most of the Philippine academia, leaders, politicians and lawyers are brainwashed and think that Muslims or Moros are indigenous people.

The Philippine government financially supports only one religion and that is the religion of (Islam). Those who practice the religion of Islam are called Muslims. The Bangsamoro is run by Muslims.

We will not go article by article or section by section of what the BBL is about. You may peruse over the basic law yourself. Here is the link to the Draft for a law to create the Bangsamoro - 122 pages.

If the BBL is passed it will replace the existing ARMM. The Bangsamoro is a bigger blanket that covers more space and also requires more governmental budget.

Inequality in how The Philippine government looks at Religion

Why does The Philippine government financially support ISLAM (the Muslims) and not the other religions?

Snapshot of the history of Islam in the Philippines.

This march forward will not stop until the Muslims will get what they want, the entire Philippines.

Note: These 4 presidents (Carlos Garcia, Diosdado Macapagal, Ferdinand Marcos, Corazon Aquino), within 30 years successfully undid what the Spaniards and the Americans accomplished in over 518 years.

The Muslims are always courting and bribing the president of the Philippines to get what they want. Gloria Macapagal Arroyo, successfully managed to allow the first introduction of the BBL. Then Benigno Aquino almost successfully passed the BBL into law. The current president Duterte does not talk about BBL anymore, he goes directly into Federalism. Federalism in the Philippines guarantees the Moros an Islamic Bangasamoro State.

ARTICLE X
BANGSAMORO JUSTICE SYSTEM
Shari’ah Judicial System, Section 4:
"Under Shari’ah, the penalties for Hudud, plural for Hadd (capital crime) which are seen as crimes against Allah (God) and Qisas, which are crimes against persons, are imposed in the Qur’an."

All the Ethnic and indigenous tribes in the Philippines should be supported by the government. Below are some of the tribes in Mindanao.

Muslims: not an Ethnic group or race, Muslims are those who practice the religion of Islam

Muslim (Moro) is not an ethnicity. Muslim by definition is an individual practicing the religion of ISLAM. Not all the Muslim (Moro) people in the Philippines are indigenous. There are several races in the Philippines practicing the religion of Islam and they are Muslim. But not all of them are indigenous. Take the Chinese Muslims in Tawi-Tawi, the Indian Muslim in Zamboanga, or the caucasian Muslim in CDO; all three belong to different races and ethnicity. Also the moros/muslims are preaching that the indigenous people of Mindanao and Sulu are Muslims or moros. They are preaching lies. These indigenous people practice and follow different religions besides Islam.

Case in point via history: Let us take two indigenous tribes as an example. The tausugs of Sulu and the Maranaos of lake Lanao.

Somehow, in the twisted minds of the legislators of the Philippines, they now classified all Moro-filipinos as indigenous people.

Muslim scholars, Muslim academia, Muslim politicians, and Muslim leaders will forever continue to break the line that divides religion from ethnicity, race, ancestry and inherited status. They will continue to complicate issues until the dividing line simply becomes a shade of gray. This push will not stop until the world will define the word Muslim (Moro) as an ethnicity and classify Moros as indigenous people.

To the Muslim, governance and religion are synonymous. If a Muslim is within a country that is not Islamic, he will simply tolerate the government. The Muslims in that country will cluster and unite in their unending effort to assimilate that country into their ISLAMIC fold. Time is not a factor.

A Muslim (Moro) is trained from childhood when asked for his/her race, to answer with "I am Muslim".

Here is how the bangsamoro is It's trying to convince legislature that the Filipino-Muslims were the original inhabitants of Mindanao, Sulu, and Palawan

The BBL immediately makes an assumption that all the ancestral lands of the sulu archipelago, Mindanao and palawan all belongs to the Muslims (Moros). They made this assumption and they have the legislature fooled.

Article II section 1 of the BBL defines the bangsamoro people as:"Those who at the time of conquest and colonization were considered natives or original inhabitants of Mindanao and the Sulu archipelago and its adjacent islands including Palawan, and their descendants, whether of mixed or of full blood, shall have the right to identify themselves as Bangsamoro by ascription or self-ascription. Spouses and their descendants are classified as Bangsamoro."

Let me inform you folks. The "natives or original inhabitants" at the time of conquest and colonization were not the bangsamoro people. They were the indigenous people who practiced several forms of worship and one of them just happened to be Islam. Muslims (Bangsamoro) are not indigenous people. They are the followers of the religion of Islam.

Before the introduction of any religion or ideology into the Philippines, the indigenous people already had their own languages, traditions, beliefs and practices. These new introductions or additions simply became part of the original.

As an added bonus, they will try to re-write history and the meaning of the word "muslim". They will try to claim to be the original inhabitants of the area. They will try to convince legislature at all cost that they are an ethnicity and indigenous to the locality. Last but not the least, convince the masses that Muslim is a race. Hence they coined the word "half-muslim".

The religion of Islam should be treated just like any other religions in the Philippines. The Philippines should uphold the "separation of church and state as it is stated in the constitution. The government should not financially support any religion. Giving the bangsamoro a state of its own is a violation of the constitution. It is financially supporting the religion of Islam.

The Philippine Government is religiously biased. To defeat the BBL or Bangsamoro once and for all, legislature must be convinced that the Bangsamoro people were not the original "natives or inhabitants" of the entire Philippine archipelago or the sulu archipelago, mindanao or palwawan for that matter.

Separation of religion and state is not an option for Muslims

Islam is a religion and a form of governance. Muslims are obligated to follow Sharia law. This religious law (Sharia), is what regulates the daily lives of the Muslim. Without Sharia law there is no Islam. Hence, the separation of religion and state or government is not an option for the Muslims. The muslims will contradict this statement by re-routing the topic other quotes in the Quran and and will point out how some Muslims are living in countries without Sharia law. If you follow that discussion format then the topic will get confused because that is what they want. Simply go back and ask the Muslim a simple question: "Can you as a Muslim live without believing and following Sharia Law?"

Will The Philippines be a more prosperous Country if it is an ISLAMIC country?

There is a great possibility that the Philippines may be a better country if it is an Islamic country. Read this Article.

The Philippines has congressmen and women in a contest to create laws. The problem is, once approved they are rarely enforced. There is an obvious lack of discipline. Maybe Islam can bring that much needed discipline to the country.

The Preamble of the 1987 Constitution of The Philippines

We, the sovereign Filipino people, imploring the aid of Almighty God, in order to build a just and humane society, and establish a Government that shall embody our ideals and aspirations, promote the common good, conserve and develop our patrimony, and secure to ourselves and our posterity, the blessings of independence and democracy under the rule of law and a regime of truth, justice, freedom, love, equality, and peace, do ordain and promulgate this Constitution.

Current Philippines' administration take on the separation of church and state

We shout for peace. We pray for the amicability of all religions in the Philippines. We are not against the practice of any Religion. We are in favor of the "Freedom of Religion". We are also an advocate for the "Separation of Church and State", specially when it is specifically stated in the constitution.

The following 12 pages uses this file:

This file contains additional information, probably added from the digital camera or scanner used to create or digitize it. If the file has been modified from its original state, some details may not fully reflect the modified file.
Retrieved from "https://zamboanga.com/z/index.php?title=File:Flag_under_god_2.jpg&oldid=851266"