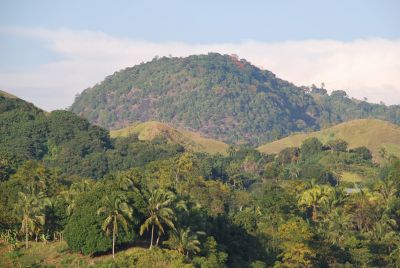 Celebration of the Holy Week 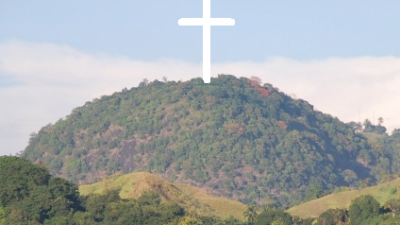 A proposed site for the 500ft cross of Christ to be erected at the top of Mount columbato.

Mount Columbato is at least 1,200 feet tall. The mountain is made out of molten volcanic rock. A great and stable foundation for the 500 foot tall cross.

Zamboanga City is supposed to be a city for all. But the Muslims(Moros) want it for their own. So when push comes to shove, the Non-Muslims of Zamboanga City must make a stand.

Every year during holy week, people from all over make their pilgrimage to this place and say their prayers at each of the 14 stations on the way up to the main cross commemorating the crucifixion of Jesus Christ.

The correct name of the mountain is Columbato

The name columbato is from the bisaya words "Kolum"(column) and bato(stone or rock). The chavacanos spelled the word "kolum" as "colum" but kept the "bato" as is.

Mt. Columbato in Zambo City once a volcano: Phivolcs
By Salvador Santiago

ZAMBOANGA CITY -- The Philippine Institute of Volcanology and Seismology (Phivolcs) said Mount Pulong Bato, originally known as Mount Columbato, in Barangay Pasonanca, this city, was once upon a time a volcano.

Engr. Allan Rommel Labayog, Phivolcs-Zamboanga science research analyst, disclosed Thursday that a team from the University of the Philippines Geological Society studied Mount Pulong Bato in 1990 and “the result appeared that the mountain has an episode of volcanism and its surrounding areas.”

“It is possible that the lava became solid and for so many years, due to the element of erosion, the once huge mountain we see today is the lava dome,” Labayog said.

Labayog said although the presumptive volcano has been inactive for thousands of years, “it could be possible it will become active again...but only time can tell.”

Mount Pulong Bato (Columbato) is a monolith located in Upper Abong-Abong Park within the Pasonanca Natural Park, in Barangay Pasonanca, only a few kilometers away from the city's downtown section.

What is unusual about the mountain is that unlike the other mountains surrounding this city, only Mt. Columbato is made from solid rock.

Meanwhile, Labayog said that there are 24 potentially active and inactive volcanoes in Basilan, Sulu, and Tawi Tawi areas.

He said Bud (Mount) Dau in Sulu had volcanic activity in the year 1900 and could still be active.

Labayog classified volcanoes in three categories: active, if the volcano erupted within 10,000 years; potentially active, if it has no record of eruption but its structure is visible or starting to formalize; and inactive, if there is no eruption for thousands of years. (PNA)

This article was copied verbatim from: https://www.pna.gov.ph/articles/1091728