From Philippines
(Redirected from B.O.S.S. Brotherhood Operation for Sweet Smile)
Jump to navigation Jump to search
→ → Go back HOME to Zamboanga: the Portal to the Philippines.

All your donations will go to project BOSS.

Because of your donations, this woman can now have a great smile.

Cleft Lip/Palate - Harelip in the Philippines

Article below copied verbatim from: http://www.ncbi.nlm.nih.gov/m/pubmed/9003905/

Clinical and epidemiologic studies of defined geographic populations can serve as a means of establishing data important for genetic counseling and as a first step in identifying strategies best suited for identification of causes. Under the sponsorship of Operation Smile International, clinical, genetic, and epidemiologic studies were carried out at six sites within the Philippines between 1989 and 1996.

Patients who were being evaluated for surgical repair of craniofacial anomalies (primarily clefts of the lip and palate) were briefly examined for the presence of associated anomalies, and a family history was obtained to look for the frequency of cleft lip and palate in siblings.

Birth records of 47,969 newborns over an 8-year period at one hospital in Bacolod City in the province of Negros Occidental were reviewed. Medical records of infants born with clefts of the lip and/or palate and other major anomalies were reviewed and birth prevalence rates calculated. Findings include a birth prevalence of 1.94 per 1000 live births for cleft lip with/without palate in the Philippines.

Recurrence rates in siblings for nonsyndromic clefts of the lip and palate were 23 per 1000 for cleft lip with or without cleft palate, and 14 per 1000 for cleft palate only. The percentage of clefts associated with multiple anomalies was 21% at birth and 6% for individuals examined during the screening process, providing evidence for a high postnatal death rate.

These data provide groundwork for additional etiologic studies including segregation analysis and molecular genetic studies involving linkage or association, as well as for studies of environmental contributions to clefting such as vitamin deficiencies. Preliminary molecular analysis using an association approach is reported in a companion paper.

The findings suggest a high incidence of cleft lip and palate in native-born Filipinos.

Cataract in The Philippines

A cataract occurs when the lens inside your eye becomes cloudy. Things linked to clouding include: Aging (age-related cataracts).
Overexposure to ultraviolet (UV) radiation, such as from sunlight, tanning booths, or sunlamps. Diabetes. Diabetes, especially when the blood sugar levels are above the safe range, causes changes in the eye that can result in cataracts. Disease inside the eye, such as glaucoma, retinitis pigmentosa, retinal detachment, or long-term uveitis. Long-term use of steroid medicines. Frequent X-rays or radiation treatments to the head.

Family history (genetics). A person may inherit the tendency to develop cataracts.
Vitrectomy. People older than age 50 who have had the vitreous gel removed from their eye (vitrectomy) have an increased risk of cataracts. Eye injury. Even though injury-related cataracts are rare, injury is a leading cause of cataracts in children. Being born with cataracts (congenital). Some children are born with the condition.

To give new Sight to the cataract afflicted people and Sweet Smile to the cleft lip/palate afflicted children.

Get the brotherhood and other people involved and with partnership with Smile Train sponsored groups extend free surgical restoration to indigent hapless citizen of Mindanao and parts of Visayas in particular, and the nation in general. Have the brotherhood worldwide and friends to participate and support our noble cause. To make this a foundation.

Commendation of Project B.O.S.S. from the Vice-President of the Philippines

Vice-President Jejomar C. Binay wrote a letter of commendation to the founder of Project B.O.S.S.

Commendation of Project B.O.S.S. from the Philippine Army General Headquarters 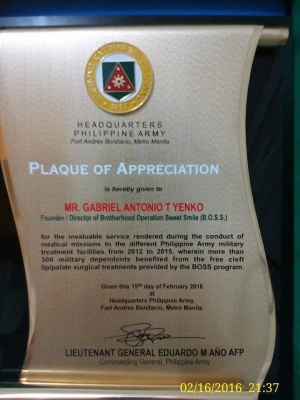 It was time for a repeat in Zamboanga del Sur, same venue and this time 52 arrived & 40 were operated last Nov.2011. The Chief of Hospital Dr. Richard B. Sison didn't expect that there would still be this many after our first mission. Our partners as usual is the Maharlika Charity Foundation (MCFI). How sad bro Butch Mapayo didn't join this mission. ->->Full Story

Other Areas Being Worked On For Replication

Donations Please: For the continued effort of B.O.S.S., we need your assistance.

What Causes a Cleft Lip/Palate?

The development of the face is coordinated by complex morphogenetic events and rapid proliferative expansion, and is thus highly susceptible to environmental and genetic factors, rationalising the high incidence of facial malformations. During the first six to eight weeks of pregnancy, the shape of the embryo's head is formed. Five primitive tissue lobes grow: a) one from the top of the head down towards the future upper lip; (Frontonasal Prominence) b-c) two from the cheeks, which meet the first lobe to form the upper lip; (Maxillar Prominence) d-e) and just below, two additional lobes grow from each side, which form the chin and lower lip; (Mandibular Prominence) If these tissues fail to meet, a gap appears where the tissues should have joined (fused). This may happen in any single joining site, or simultaneously in several or all of them. The resulting birth defect reflects the locations and severity of individual fusion failures (e.g., from a small lip or palate fissure up to a completely malformed face). The upper lip is formed earlier than the palate, from the first three lobes named a to c above. Formation of the palate is the last step in joining the five embryonic facial lobes, and involves the back portions of the lobes b and c. These back portions are called palatal shelves, which grow towards each other until they fuse in the middle. This process is very vulnerable to multiple toxic substances, environmental pollutants, and nutritional imbalance. The biologic mechanisms of mutual recognition of the two cabinets, and the way they are glued together, are quite complex and obscure despite intensive scientific research.

Doctors don't always know exactly why a baby develops cleft lip or cleft palate, but believe it may be a combination of genetic (inherited) and environmental factors (like certain medications or vitamin deficiencies). Both mothers and fathers can pass on a gene or genes that cause cleft palate or cleft lip.

Genetic factors contributing to cleft lip and cleft palate formation have been identified for some syndromic cases, but knowledge about genetic factors that contribute to the more common isolated cases of cleft lip/palate is still patchy. Many clefts run in families, even though in some cases there does not seem to be an identifiable syndrome present,[21] possibly because of the current incomplete genetic understanding of midfacial development. A number of genes are involved including cleft lip and palate trans-membrane protein 1 and GAD1, one of the glutamate decarboxylases

This webpage was authorized by Mr. Gabriel T. Yenko

Give this Child The Gift of a beautiful Smile

Poor child! can't be operated on yet for she's underweight, cause can't feed well due to her condition. This is a temporary remedy till after two months she'll be checked again if ok for operation already. She's a grandchild of APO parents. >>Read Full Story

To view the rest of the pictures, please click on B.O.S.S. Photo Gallery.

Click to view the Comments and Discussions about Project B.O.S.S.


A Non-Profit Charitable organization for surgical restoration. Registered with the Security and Exchange Commission of the Philippines
Contact: