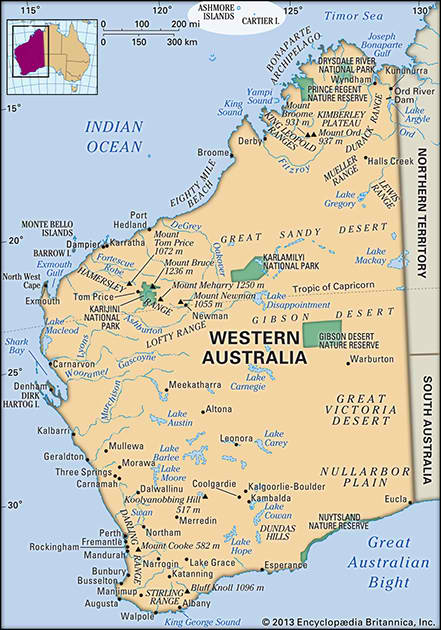 Ashmore and Cartier Islands, officially Territory of Ashmore and Cartier Islands, external territory of Australia, in the Indian Ocean. The islands lie 200 miles (320 km) northwest of Western Australia state and some 105 miles (170 km) southwest of the island of Roti, Indonesia. The Ashmore Islands, comprising Middle, East, and West islands, are coral islets within a reef. Cartier Island, also lying within a reef, is sandier in composition. The islands and their surrounding waters were visited by Indonesian fishermen beginning about 1700. The first European to reach Cartier Island, in 1800, was a British sea captain named Nash, who sailed aboard the Cartier. Ashmore Reef was discovered in February 1811 by Capt. Samuel Ashmore of the ship Hibernia, for which another nearby reef was named. American whaling ships plied the area in the 1850s. Great Britain and the United States both claimed possession of the islands; Britain finally annexed Ashmore in 1878 and Cartier in 1909. In the late 19th century West Island was exploited for its deposits of phosphate, an activity that removed most of the island’s topsoil. Britain gave the territory to Australia in 1933; it was administratively linked to the Northern Territory of Australia from 1938 until 1978, when administration passed to the national government. After the islands’ natural resources had been exploited for a century, scientists began raising concern that the islands’ bird and plant life was in danger of being overharvested. In the mid-20th century Australia and Indonesia negotiated an agreement formalizing the rights of traditional Indonesian fishers. Other agreements have addressed petroleum exploration and the protection of biodiversity. The islands are uninhabited except for seasonal caretakers; there is an automatic weather station on West Island. Australia administers the extraction of petroleum from undersea oil fields adjacent to the territory. Ashmore Reef National Nature Reserve, with an area of 225 square miles (583 square km), was established in 1983. Cartier Island Marine Reserve, some 30 miles (50 km) to the southeast, was established in 2000; it has an area of about 65 square miles (170 square km). Most of the Ashmore Reef reserve is closed to visitors, as is all of the Cartier Island reserve.

The Territory of Ashmore and Cartier Islands is made up of the West, Middle and East Islands of Ashmore Reef as well as Cartier Island and the surrounding 12 nautical mile Territorial sea. The islands are uninhabited, small, low and composed of coral and sand, with some grass cover.--->>>>>Read More,<<<<

People and Society of Ashmore

note: Indonesian fishermen are allowed access to the lagoon and fresh water at Ashmore Reef's West Island; access to East and Middle Islands is by permit only.

This entry briefly describes the type of economy, including the degree of market orientation, the level of economic development, the most important natural resources, and the unique areas of specialization. It also characterizes major economic events and policy changes in the most recent 12 months and may include a statement about one or two key future macroeconomic trends.

Diplomatic representation in the US:

Geographic Names (Italy is used as an example):

A written flag description produced from actual flags or the best information available at the time the entry was written. The flags of independent states are used by their dependencies unless there is an officially recognized local flag. Some disputed and other areas do not have flags. Legal system: A brief description of the legal system's historical roots, role in government, and acceptance of International Court of Justice (ICJ) jurisdiction.

This entry includes a wide variety of situations that range from traditional bilateral boundary disputes to unilateral claims of one sort or another. Information regarding disputes over international terrestrial and maritime boundaries has been reviewed by the US Department of State. References to other situations involving borders or frontiers may also be included, such as resource disputes, geopolitical questions, or irredentist issues; however, inclusion does not necessarily constitute official acceptance or recognition by the US Government.

History of Ashmore and Cartier Islands

Indonesian fisherman have traditionally utilised the coastal resources of the Territory since the early eighteenth century. Prevailing trade winds and local land marks were used to set course and sail between the islands.

The 1850s saw the operation of American whalers in the region, and upon the discovery of phosphate deposits in the latter half of the nineteenth century mining began on Ashmore Island.

In the late nineteenth century Britain and the United States of America contested the ownership of Ashmore Island, with Britain assuming ‘formal’ possession in 1878. British sovereignty over the Island was later declared, with the subsequent annexation of Cartier Island taking place in 1909. The official proclamation of British land occurred on 17 May 1909.

During the Second World War the territory received various naval visits and was used as a bombing and air weapons range for defence purposes. Throughout the 50s and 60s unmanned navigational lights and meteorological stations and signs were constructed, with naval visits and aircraft surveillance continuing.

In 1974 Australia and Indonesia entered into a Memorandum of Understanding (MOU) recognising the traditional use by Indonesian fisherman of the territory's resources, and granting the rights of access to Australian waters. Under the MOU traditional Indonesian fisherman are permitted to land on West Island to replenish their stores of fresh water, visit the graves of past fishers and to take shelter in the West Island Lagoon.

In 1983 the Territory was declared a nature reserve under the National Parks and Wildlife Conservation Act 1975.

In September 2001, Ashmore and Cartier Islands were excised from the Australian Migration Zone.

Other sources of information will be mentioned as they are posted.