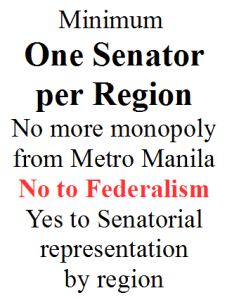 The Philippines is already divided into 17 regions with cities, municipalities and provinces within each of the regions. These 17 regions are divided as follows: 7 regions in Luzon, 4 regions in the Visayas, 6 regions in Mindanao.Each region is already well represented by the house of representatives (congressmen). However, the senate does not represent the regions properly.

Currently (2016-2019) the senate is only represented by one(1) senator from the Visayas, and only three(3) from Mindanao. The other 20 senators are from Luzon and 15 of them are from Metro Manila. Do you call this proper representation of the people in the Philippines?

That is where the disparity is. The lack of representation of the far flung barangays.

Wouldn’t it be more uniform if Mindanao had at least 6 senators to represent each of the 6 regions of Mindanao?

With the current state of affairs a candidate needs millions of pesos to be a senatorial candidate. Because his/her campaign must be nationwide and is only directed at the most populous cities and municipalities to guarantee the most votes. Plus the comelec is prejudiced in the acceptance of certificate of candidacy.

How often have you witnessed the COMELEC declare a provincial senatorial candidate as a nuisance candidate. The comelec is in cahoots with the big time money makers in the metro manila area. Unless the provincial candidate has millions of pesos and big time connections his/her chance for even being accepted by the COMELEC is hopeless.

However, with the mandatory regional senatorial representation the senatorial candidates must come from each of the 17 regions of the Philippines. Even the poorest region will have a senator to represent them. And their senator will be elected by them and not by voters from another region. The senator will be accountable to voters within the region he/she will represent.

Minimum of one senator per Region. No more imperial Manila.

Each senator will be elected from the region they represent. Senatorial election will no longer be a national election where the rich and popular from the NCR region (metro manila) will dominate the list of candidates. The senatorial election will be regional. The only position that will be elected via national election will be the president and vice-president of the Philippines. The rest will be by region (senators), by province (governors/congressmen), by municipalities/cities (mayors,councilors,congressmen). Senatorial representation by region will have the effect of flattening the power structure. Regional problems and concerns within a national view can be addressed more effectively. A senator’s performance, accountability, and electability become meaningful to a more defined and identifiable regional constituency. As an example: The senator for Region VII (Eastern Visayas) will be elected by the registered voters within Region VII (Eastern Visayas) and not by the registered voters of the other regions. The number of senatorial representation for each region will be determined by population, the minimum is one per region.

Currently our senators don’t care, they are not held accountable locally.

If they do not represent the region properly they will not be re-elected. They can’t get support anywhere else. A senator from Iloilo can’t campaign to the people from Cebu for support. Each regional senator to his own region. Accountability will help control the beast.

Only 6 regions are represented. No wonder the Philippines is messed up! Imagine that! 11 regions not represented.

Don’t be tempted by the push of Federalism. The proponents of Federalism insists that imperial metro manila hogs all the income of the Philippines and that very little is being distributed to the rest of the Philippines. They are even insisting that the money of the poor provinces go to finance Metro Manila. These are all lies. It is in fact the other way around. Metro Manila is financing the poor provinces. The proponents of federalism are twisting the truth and present you with lies.

With the unitary form of government the NCR doesn’t get to spend all its earnings. Over 40% of its earning are distributed throughout the Philippines. This makes the politicians of the NCR upset.