Pushing the idea of “black lives matter” is biased, prejudicial and racial.

An american (USA) family who teaches their children that they are African-Americans first instead of simply Americans, teaches prejudice.

Teach the children about their heritage, race, culture and to be proud of their origins. But never pigeon hole them into a descriptive ???origin-american.  That is not who they are. They are American citizens. The United States of America is a conglomerate of many races who came to America to be united as one, as american citizens.

All human lives matter. We are all children of God. We need to teach our children to be nice, respectful and grateful for what they have.

Martin Luther King Jr, a black american activist and an icon for civil rights movement did not protest for BLACKS only. He demanded human rights for all of humanity. He simply used the black people’s lack of civil rights as a platform but did not make it solely about the black americans. He never referred to himself as an African-American.

This organization “Black Lives Matter” is about bias, prejudice and separatism. It is supported by CAIR – Council on American-Islamic Relations. CAIR is also about prejudice, bias and separatism, it wants to divide and conquer America. CAIR is manipulating the deep prejudices of “Black lives matter” into destroying the unity of the American people. CAIR pushes the idea of “WHITE SUPREMACIST”. This organization wants America divided. They want Americans to fight against each other. CAIR is not for democracy. CAIR is for Islam and SHARIA law. CAIR does not believe in the separation of religion and government. CAIR is for an ISLAMIC form of government. CAIR found what they wanted in BLM. Most black Americans who are bitter about the past lean towards BLM and CAIR.

It is a PRIVILEGE to live in America. A great privilege to live in this great democracy where the basic needs of humanity (human rights) are respected and honored.  A privilege to live in a country where even the oppressor, the bullies, and those who preach tolerance to uplift themselves are allowed to speak up. Then they begin to think and delude themselves that these “privileges” are their rights.

Those who write, talk and protest about “white supremacy” are the people with the mindset stuck in the past which make them bitter. In America only the lack of determination prevents a person from being successful. The lives of the “protesting fools” are testaments to the opportunities available. Most of these protesters are educated and prosperous. They may have been at the bottom but now they are on top. But instead of helping those who are in the position that they were in before, by teaching FORTITUDE, they want to control by preaching SOCIALISM with high inclinations towards totalitarianism. They stoke the idea of separatism. They invest in the apathy of people and blame their circumstances in “Racism and White supremacy”. These fools do not know the meaning of GRATITUDE. 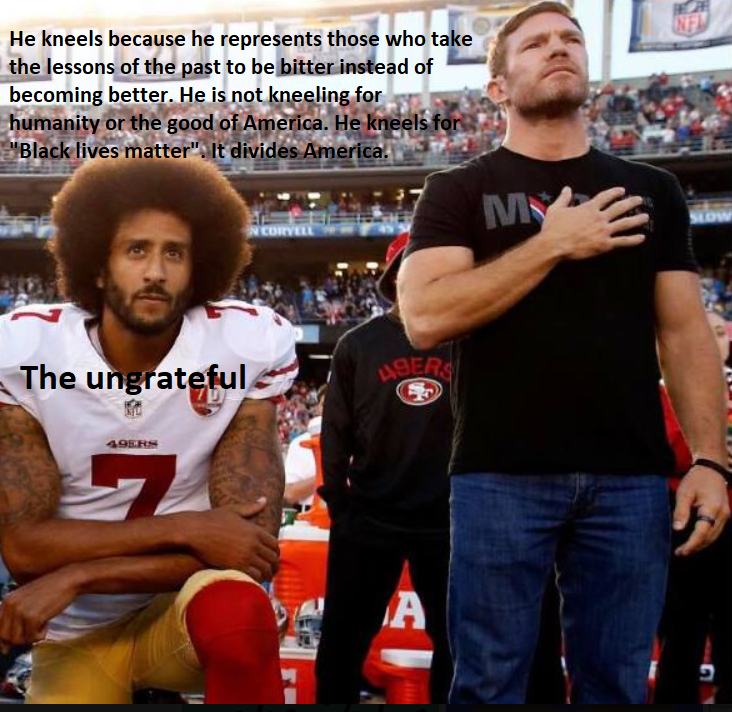 Remember the fools like Colin Kaepernick. They divide America. They are for prejudice, bias and separatism.
People read only what they want and misinterpreted the 3rd stanza of the national anthem.
It read:
“No refuge could save the hireling and slave
From the terror of flight, or the gloom of the grave:”
This was in reference to the PAID mercenaries and the slaves enticed with freedom to fight and kill the Americans.

If the British won with the help of those “paid” slaves, there would be no “black lives matter” organization today.

So these ignorant fools must educate themselves.